Trump says he has right to act on criminal cases

US President Donald Trump has tweeted he has “the legal right” to intervene in criminal cases after his attorney general complained White House tweets were making his job “impossible”.

In his post, Mr Trump also denied he had ever meddled in any cases.

America’s top law officer William Barr on Thursday asked Mr Trump to stop his tweets, saying he would not be bullied.

Mr Barr spoke out after Mr Trump renewed his attack on the criminal trial of his ex-adviser, Roger Stone.

Prosecutors had recommended Stone serve a stiff sentence, but Mr Trump tweeted that was unfair.

“The President has never asked me to do anything in a criminal case.” A.G. Barr This doesn’t mean that I do not have, as President, the legal right to do so, I do, but I have so far chosen not to!

46.1K people are talking about this
Report

It is legally ambiguous whether the US president has the authority to order the attorney general to open or shut a case.

The Department of Justice has been meant to operate without political interference since the Watergate scandal of the 1970s.

On Friday, Mr McCabe’s lawyers announced the justice department had closed its criminal inquiry into whether their client had lied to investigators about leaks to the media.

The New York Times meanwhile reported Mr Barr had appointed outside prosecutors to review the case against another Trump ally, Michael Flynn.

Flynn, who was Mr Trump’s first national security adviser, previously pleaded guilty to lying to investigators in a federal inquiry, but later withdrew co-operation and is in the midst of trying to recant his plea.

Mr Barr said on Thursday that Mr Trump “undercuts” him by tweeting, making it “impossible for me to do my job”.

“I cannot do my job here at the department with a constant background commentary that undercuts me,” he added.

“I’m not going to be bullied or influenced by anybody….whether it’s Congress, newspaper editorial boards, or the president,” Bill Barr tells @ABC News.

“I cannot do my job here at the department with a constant background commentary that undercuts me.” https://abcn.ws/2OP1sFx 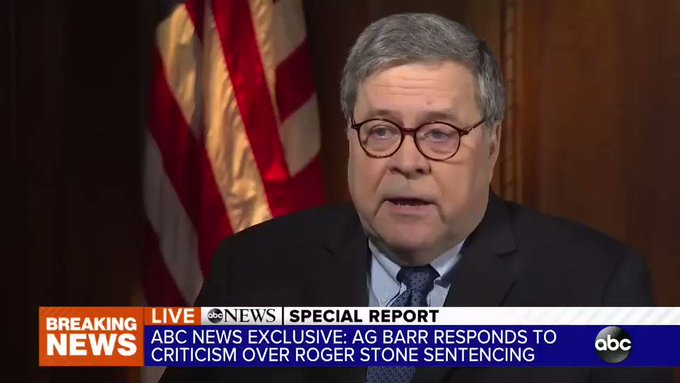 178 people are talking about this
Report

The rare show of dissent from a cabinet member widely seen as a Trump loyalist has provoked a degree of scepticism in the US media.

Critics suggested the statement could have been co-ordinated with the White House to shore up the Department of Justice’s credibility as an independent agency.

The attorney general has been an outspoken defender of the president to the extent that Democrats and former justice department officials have accused him of politicising the rule of law.

After the interview on Thursday evening, the White House said Mr Trump “wasn’t bothered by the comments at all and he has the right, just like any American citizen, to publicly offer his opinions”.

There was widespread anger this week when the Department of Justice said it planned to reduce the length of the prison sentence it would seek for Stone, a long-time friend of the president.

Stone was convicted in November of obstructing an investigation by the House Intelligence Committee into alleged Russian interference in the 2016 election.

Federal prosecutors had initially recommended Stone face seven to nine years in jail for trying to thwart the investigation.

The president swiftly voiced his opposition, tweeting: “This is a horrible and very unfair situation.”

The justice department then overruled the recommendation by its own prosecution team, prompting questions over whether Mr Barr had intervened on behalf of Mr Trump’s ally. The four prosecutors subsequently quit.

He also dropped his nomination of former US Attorney Jessie Liu, who oversaw the Stone case, for another government post in the Treasury Department.

On Thursday, Mr Trump said the federal jury that heard the case against Stone had “significant bias”.

The forewoman of the jurors reportedly identified herself in a Facebook post. Her social media posts revealed hostility to Mr Trump, it was also reported.

Stone is scheduled to be sentenced next week.