US troops express anger at Trump’s Syria policy: ‘We betrayed’ the Kurds

Several US military and defense officials, including personnel deployed to Syria, expressed dismay at how the Trump administration has handled the situation.
One US official said it is well known that some senior US military officials are livid at how the Kurds have been treated given their role in helping the US fight ISIS. 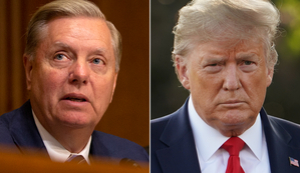 Trump moves to sanction Turkey after criticism from Congress
Another senior American defense official told CNN that Trump’s failure to more forcefully oppose the invasion or do anything to stop the attacks on the Kurds meant Trump had given Turkey a green light, despite the administration’s public stance that it had consistently opposed the operation.
The Kurdish-led Syrian Democratic Forces “are fighting a force that intends to eliminate their people because we green lighted their operation,” a senior US defense official told CNN referring to the Turkish operation.
Another US military official involved in operations in Syria said he was “ashamed” of his country’s actions with regards to the Kurdish-led Syrian Democratic Forces, saying the US had failed to defend its one-time ally in the fight against ISIS.

There’s also a concern that allies and potential partners won’t trust the US in the future.
“How do we expect anyone to partner with us now?” one US defense official told CNN.
“They did everything we asked them to do,” said another. “This is really not good for us.”
Turkey launched its long threatened incursion into the country after Trump ordered a small contingent of about 50 US troops to be pulled back from the border area amid a belief that a Turkish assault was imminent.
While Trump administration officials have argued that Turkey would have attacked the Kurds even if US troops had remained, the Kurdish-led Syrian Democratic Forces and a large bipartisan group of US lawmakers have slammed Trump for not opposing the Turkish operation more forcefully and for taking no concrete action to stop it.
Republican lawmakers in particular have harshly denounced Trump’s decision as a betrayal of the Kurds and a strategic blunder that will weaken American credibility, reverse gains against ISIS, make it harder for the US to build alliances and give a boost to Russia and Iran. 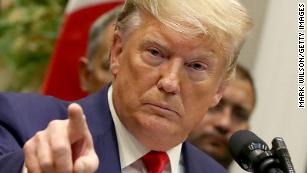 Trump’s Syria withdrawal decision sparks scramble to safely remove US troops
The Trump administration belatedly sought to halt the Turkish advance Monday, announcing a series of sanctions targeting Turkey’s Defense, Energy and Interior ministers as well as the Defense and Energy ministries.
Vice President Mike Pence also revealed that Trump had spoken with both Turkey’s President Erdogan and the Kurdish-leader of the Syrian Democratic Forces, Gen. Mazloum Kobani Abdi, adding that Trump had “received a firm commitment” from Erdogan not to attack the Syrian Kurdish city of Kobani, a location considered to be critical to the SDF.
Pence said the US was also working to set up a ceasefire between the warring factions. However, given Trump’s order to withdraw all US troops from the area, the US will find it hard to monitor much less enforce such a ceasefire and it’s unclear how much leverage the US will have to impact the situation on the ground with one official calling it “too little, too late.”
Some of the frustration among US personnel is based on the fact that in order to appease Turkey, the US convinced the Syrian Kurds to dismantle their defensive fortifications along the border and pull their fighters back. The US said Turkey had agreed to the arrangement which sought to prevent unilateral Turkish military action and also provided Turkey with US intelligence about the border area.
Cognizant of Turkey’s enmity towards Syrian Kurdish groups, the US also resisted arming Kurdish elements of the SDF, only doing so in 2017. The US also only provided both Arabs and Kurds in the SDF with light arms such as Ak-47 rifles and did not arm them with heavy weapons that could be used against a modern military equipped with tanks, artillery and warplanes like Turkey’s.
But despite those efforts to appease Ankara, Turkey launched its invasion.
Senior members of the Trump administration have insisted that the US has not deserted the Syrian Kurds. However, the US government has not taken action yet to stop the Turkish incursion.
Secretary of Defense Mark Esper claimed Friday that the US is not abandoning its Kurdish allies who are now under attack from Turkey’s military offensive into Syria, even as he made clear the US will not intervene in the fight.

However, troops on the ground have described it as an abandonment and a “betrayal.”
“It’s pretty messed up what’s happening out here,” one US Special Forces soldier on the ground in Syria told CNN when news of the US withdrawal was announced.
“We want to offer support,” the soldier said, adding “We do not want to leave them in this situation.”
Several US military officials expressed disappointment that the Pentagon and State Department were not acting with a greater sense of urgency to protect the Kurds. 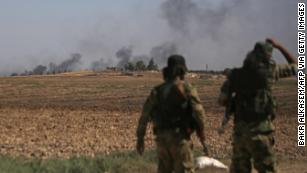 The situation in Syria is rapidly deteriorating. Four things you need to know
On Friday the chairman of the Joint Chiefs of Staff Gen. Mark Milley said he had told the SDF not to “overreact” to the Turkish operation.
Asked about the widely publicized criticism from US Special Operations Forces about the Syria policy, Secretary of the Army Ryan McCarthy said Monday that while such “candor” was “important,” he said, “When national policy decisions are made, we salute and move out.”
“I like candor. It’s important to have that. Obviously, you don’t want to have disobedience, but you, it’s definitely, they have to have opinions. Everybody has opinions, you have a war of ideas, but ultimately that they, when national policy decisions are made, we salute and move out,” he told reporters.
“They should be extremely proud of what they’ve done. and there are higher level strategic politics involved, but as far as what our soldiers have done, what our special forces have done, they’ve done an incredible job over there and they ought to be very, very proud of it,” Gen. James McConville, the chief of staff of the Army, said Monday while appearing beside McCarthy.
In the absence of US assistance in the face of the Turkish attack the Kurds have sought protection from the Assad regime in Damascus and their Russian military backers, something Trump tweeted Monday that he was OK with.
Trump had earlier Monday cited uncorroborated reports that Kurdish officials had released some of the 10,000 ISIS prisoners being held by the SDF, a notion that was immediately rejected by a member of his own administration.
“Falsely claiming that the SDF Kurds are letting ISIS prisoners out of prison is wrong,” a senior defense official said.